By Jason Twite Comments Off on Tournament of Destruction: Five-0 @ The Dirty “O”

Team Demo Association, Special Olympics, and Illinois law enforcement agencies join forces again for the 4th annual “Five-0 at the Dirty-O” police car race during the Tournament of Destruction at the Dirt Oval at Route 66 Raceway!

It’s the half way point, and the breaking point, of the Team Demolition Derby season. Sustaining and building momentum is key to withstand the Summer-long marathon of mayhem to claim victory in the Tournament of Destruction.

The 4th annual Five-0 @ The Dirty O event is a joint effort between The Illinois Law Enforcement Torch Run and Dirt Oval 66 to support the athletes of Special Olympics Illinois. 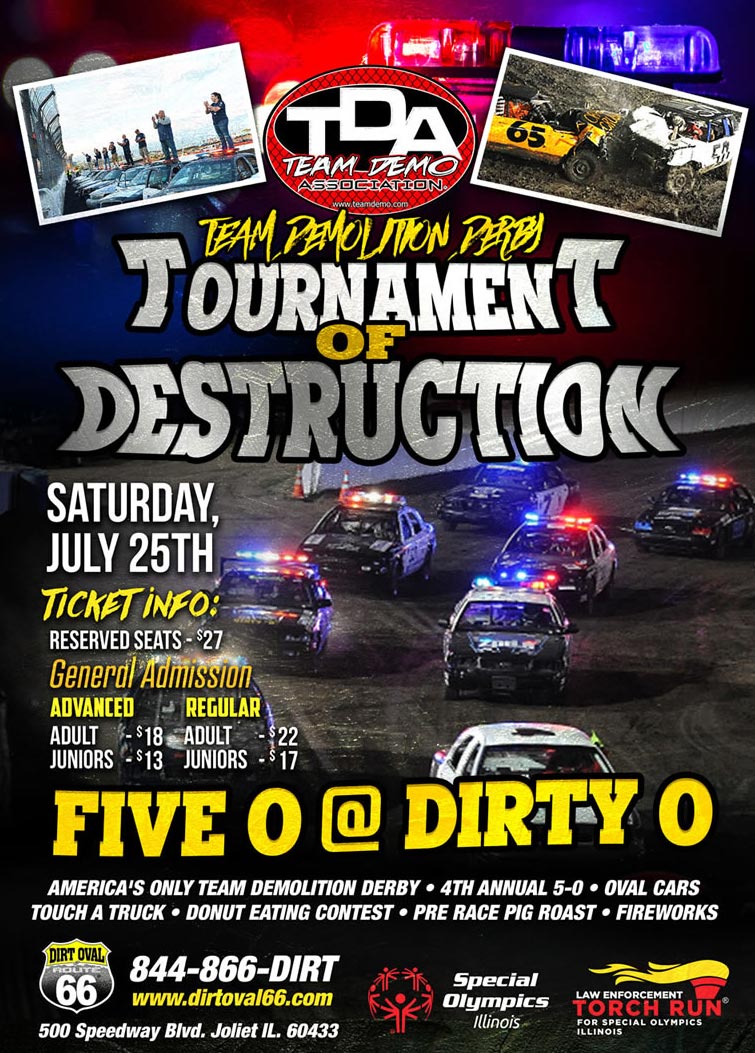 Team Demolition Derby – 6 teams in the ultimate war of wreckage! The fallout from Round 1 rises to the surface. Round 2 is the first gut check to find out which teams are championship players and ready to survive a Summer-long race to the bitter end.

Five-0 Police Car Races – law enforcement officers in a high speed pursuit to determine who is the Top Cop in Chicagoland.  Over 20 cars spread across two 5-lap heat races and the entire field in the 15-lap feature on the 3/8 mile dirt oval. It is unpredictable excitement! Each driver in the Five-0 race must raise a minimum of $500 in order to participate. The starting grids are determined by the amount of money raised by each officer. You or your department want to compete? Get full details at SOILL.org; register at the official Donor Drive site then also complete the form on dirtoval66.com.

Touch A Truck Show – law enforcement and emergency services vehicles on display near the main entrance.

Donut eating contest – Truly feed your appetite for destruction! Registration occurs day-of in front of the grandstands between 6-7pm.

Fireworks – best sky show in town! We light up the sky right before the Team Demo final race.

Watch video highlights from the 2019 Five-0 @ the Dirty “O” police car race! In-car cameras, sky-high drone view and from track side to get you ready for what to expect on July 25th.