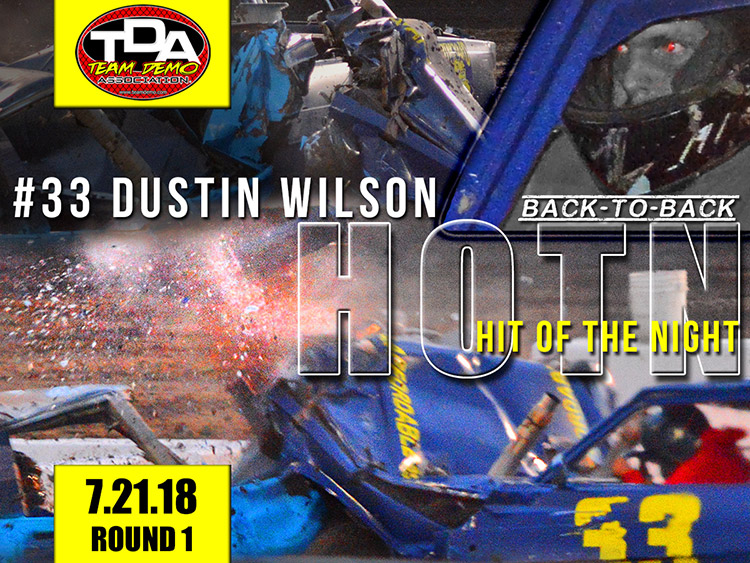 At the Round 2 event, #33 Dustin Wilson was pegged as lap runner for Junkyard Dogs against Orange Crush. He wound up delivering the Hit of the Night.

Days later, his plan for Round 3 was already set: “I won’t be running this time. I’m out to destroy,” said Wilson. And that’s exactly what happened. Spontaneous or planned, the end result included yet another massive mauling and back-to-back Hit of the Night awards!

Junkyard Dogs did not run and hide at the sight of the newly unveiled, immediately intimidating Rude Awakening. Together the teams executed a destructive, dramatic showdown and Race of the Night nominee.

Wilson attacked early and often with solid shots on #777 Pete Ryan and the returning #7 Zac Van Allen. Rude Awakening pressed forward with #71 Mark Van Allen out front by a lap and heading towards the white flag. Around Turn 3, Mark Van Allen barreled through #39 Jason Ritacco and went wide towards the wall. Wilson was the only Junkyard Dog car up ahead and closing with tremendous speed. Van Allen hit the brakes in hopes Wilson would only catch a glancing blow. Ritacco caught up to Van Allen and shoved from behind, twisting the #71 at the last split-second directly into a head-on impalement from Wilson! The front-ends exploded in a shower of metal shrapnel that resembled a Louisville Slugger smashing the face of a child’s birthday party pinata. Total annihilation.

The well-timed teamwork came not a moment too soon. #31 Steven Scarbro Jr eclipsed the leader one lap after the impact, but he was also on the receiving end of a Hit of the Night contender from Zac Van Allen just seconds after taking the lead, which stopped him from completing Lap 5. Ultimately, JYD held on to win it, but the outcome may have been quite different without the key strike from Wilson and assist from Ritacco.

What does Wilson have in mind for Round 4 and 5? We’re mildly afraid of the answer, but eager to see it.

Each team dealt out and fought off heavy hits in the first round to meet in the Semi-Finals; their first encounter since June 2016. #40 Ron Johnston, #47 Steve Vollbrecht and #38 Kyle Shearer were the only three of the current eight drivers in that race, which Full Throttle won en route to winning the event. To no surprise, those three veterans were right in the middle of the outcome for this one.

A slow developing first lap had #3 Steven Scarbro Jr out front without much trouble. Lap 2 was quite different. Steven tried to go the high route around Turn 2, but got pinned against the wall in a cousin crushing hit from #49 Arthur Scarbro. #48 Brien Chancey was not far behind and took over the lead. Vollbrecht hit a stiff trunk shot on #34 Niko Rangel and then seemingly had a clear path to start collecting laps himself. Scarbro Jr re-fired and reversed away from the wall and caught Vollbrecht directly in the left rear wheel. The impact ripped out the axle on the #47 and silenced Full Throttle’s best weapon.

Shearer smashed into the #48 and battled side-by-side all the way around to Turn 3 where he ultimately got the upper hand and spun around Chancey. Shearer was in the clear, but also in a clear path for a revengeful door-destroying hit from the non-teammate Scarbro.

Rangel and Scarbro Jr tried to capitalize on Shearer’s efforts and rounded Turn 3 with only one purple car in their way. Johnston didn’t have the angle to hit either JYD car. Instead, he executed a smart & simple block by driving right in front of their path; got a slight bump from Scarbro Jr and threw the car in reverse to immediately stop Rangel from cutting around on the inside. Chancey wound up as the benefactor and extended the lead.

Steven backtracked around Turn 3 and made another run at it. Arthur made another run at him as well. He put his cousin in the crosshairs and drilled him in the front fender, pushing both cars up to the wall almost in the exact same sequence as the previous lap.

Shearer charged from the front stretch aiming to knock the Scarbro’s apart, but he went too high and wound up with an unintentional t-bone hit from Steven and the victim of another 2-for-1 stoppage by Full Throttle.

Johnston rocked Rangel backwards once more for good measure and Chancey cruised through for the win. Full Throttle rode the momentum into the Finals and defeated Crazy 8s for the second time this season which also cut the championship contenders to three. Orange Crush and Crazy 8s are the only teams that can still knock Full Throttle from points lead. It’s a must-win for them while Full Throttle has eyes on clinching back-to-back championships at the critical Tournament of Destruction Round 4!

The new breed Mean Green Machine recruited veteran wildman #18 Mike Beck to help get the team back on the winning track. South Side Bandits matched their tactics with the addition of #5 Dave Swan. Just one of those two drivers have more Team Demo experience than the other six teammates combined!

#56 Mike Jackson broke at the line which gave Mean Green a 3-on-4 advantage, but it didn’t guarantee victory. Swan sped away from the pack and a timely block by #58 Ray Bockstahler collected two green cars. Bandits were in control until Beck realized he had to catch the leader… head on. Beck spun around Turn 3 and met Swan with a direct shot up against the back wall. A pile-up ensued and MGM couldn’t capitalize. Swan broke free and a cat & mouse game between he and Beck went corner-to-corner across the next lap, trading hits until the cat finally trapped the mouse in Turn 4 of Lap 4. The heavy damage knocked out both cars which left only two MGM cars running.

#15 Charlie Ealy completed one lap then sputtered out. #13 John Fillers was in better shape, calmly collecting three laps and only two turns from taking the lead. Then the long arm of disappointment reached out and crushed that plan. The #13 coasted to a silent stop around Turn 2, leaving their first win mere feet in the distance, and sealing a countdown victory for South Side Bandits.
Mean Green will try for that first win of the season at Round 4 on August 25 and they’ll have to overcome either Junkyard Dogs, Orange Crush or the equally win-deprived Chicago Hitmen or Rude Awakening.