By Jason Twite Comments Off on Round 4 Award Winners

Orange Crush & Full Throttle’s latest Race of the Night honor is yet another footnote in the series’ greatest rivalry. The scenario was simple: Full Throttle wins = Orange Crush is out of the title hunt.

#47 Steve Vollbrecht forced #61 John Clemmons straight into the Turn 1 wall, but #60 Dave Swan quickly knocked his runner loose. #64 Ryan Riley broke free from the 5-car mess around the starting line and slid around Turn 1, but did a full 180 either due to the slick conditions or the on-coming sight of two purple blockers. Clemmons bounded away from a solid hit by #49 Arthur Scarbro to gain the outright advantage while Scarbro was left stuck mired in muck near the wall. Two more crucial blocks by Orange Crush allowed Clemmons to get across the line first.  And that was just Lap 1.

On Lap 2, Clemmons and Riley were left unguarded and Vollbrecht teed off with a perfectly executed half-track blast on Clemmons smashing him into the wall. #62 Tom Lewis struck back on Vollbrecht as Riley took the lead, but Clemmons was wrecked.

#40 Ron Johnston and Vollbrecht tried every angle to slow down Riley.  Vollbrecht got him at the white flag; Johnston followed-up with a head-on hit; Riley stormed away only to be caught in the crosshairs of Vollbrecht again, but this time right in the driver’s door! Incredible sequence.

Quietly keeping pace throughout all this was #48 Brien Chancey who was just one lap behind at this point. Suddenly, Clemmons roared back to life with the entire driver’s side door skin tore off! Vollbrecht didn’t let him go beyond the front stretch and there wasn’t much to worry about with Riley only two turns from the win. Right?

Wrong. Riley stalled in Turn 3 as Chancey erased the lap deficit and was closing fast.Riley re-fired, got to Turn 4, and the car died again in a huge cloud of steam and smoke! Chancey was nearly on Riley’s back bumper when the leader surged again just as Chancey’s momentum fizzled around the corner. The car held power across the stripe to score the dramatic win that was nearly an even more dramatic comeback for Full Throttle.

Will there be one more epic encounter between the two in 2018? Both teams must survive different first round opponents to setup a showdown for the 2018 Tournament of Destruction Championship in the Semi-Finals or Finals.
The drivers want it. The fans want it. Everyone wants it. 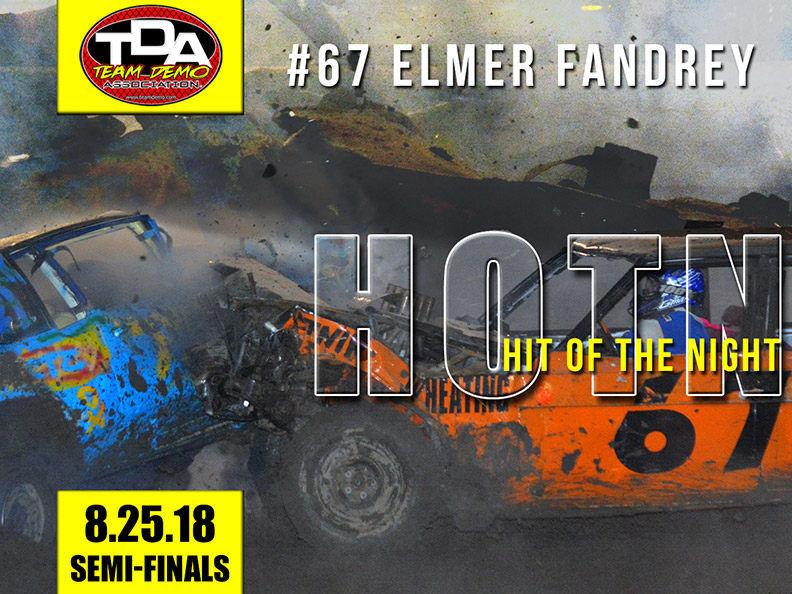 A revolving door of Orange Crush team members led to Elmer Fandrey winding up back behind the wheel in July and out of a very brief retirement.  A three-time Champion with Orange Crush (2010, 2013, 2015), he is no stranger to the must-win situations late in a Demo season. A loss against Rude Awakening would’ve drastically reduced Orange Crush’s odds of remaining in the Championship picture.

The slick surface near the front stretch didn’t bode well for him in the opening minutes of the race. A minor hit with #70 Jerry Decker and a few shoves to spin out #777 Pete Ryan didn’t amount to much. The lack of footing really hurt when he was late on the timing to stop Ryan from charging down the front stretch like a steaming locomotive and delivering a thunderous head-on impact to #61 John Clemmons in Turn 4.

A wonderful thing about Team Demo is, that if the race isn’t over, there’s probably a chance for redemption. Fandrey quickly struck back with a hard hit to the front of #71 Mark Van Allen to keep him at bay while #64 Ryan Riley tried to pick up the lead.

Van Allen and Riley desperately fought damage and the dirt to get their smashed sedans pointed in the right direction and moving around Turn 4. Pete Ryan’s billowing blue ride was aimed towards Riley, when suddenly Fandrey found that elusive traction and smashed straight up and through Ryan’s front-end in a plume of smoke and shrapnel! Fandrey didn’t lift his right foot and completed the combo by burying his bumper into the front of the #71 once more. The hit eliminated Van Allen from the race and Fandrey ultimately pinned Ryan against the wall to secure the countdown win.

Seizing the opportunities for big blocks and timely tactics are well within the playbooks of Full Throttle and Orange Crush.  They’ve used it en route to multiple Hit of the Night, Race of the Night, and event victories to this point.  Undoubtedly, their whole arsenal will be ready – it has to be ready – to battle for the Tournament of Destruction Championship this Saturday at Round 5. 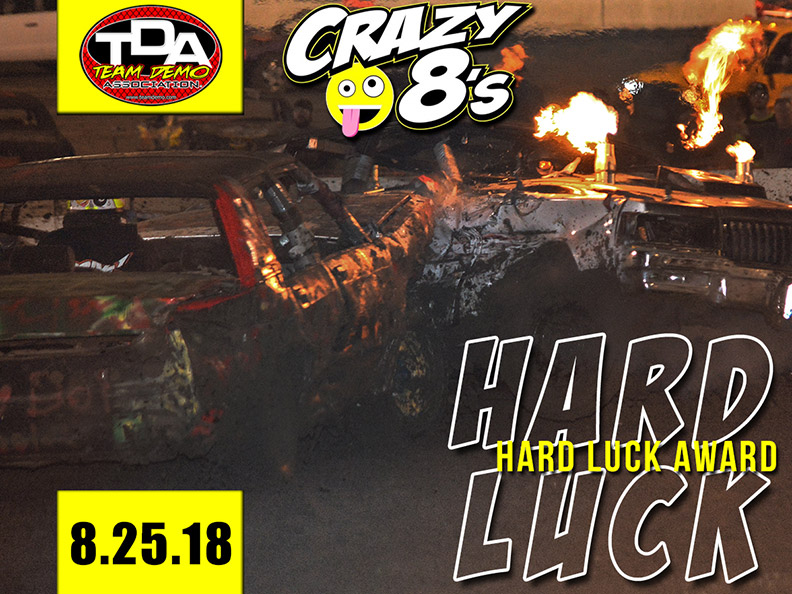 Crazy 8s entered Round 3 in second place overall and were given a prime chance to move closer to the top spot thanks to Orange Crush defeating Full Throttle minutes prior. But within seconds of the green flag, the brass ring slipped through their grasp.  #87 Matt Wilson blasted out of the hole and nailed Chicago Hitmen’s #29 Dave Janjanin in the right rear side which propelled both cars towards the wall between Turns 1 and 2. The hit accidentally collected #81 Nick Bowley in the process, but worse yet, sailed Wilson into a collision course with the concrete. He smacked the wall driver’s side-first and could go no further. The race was stopped while safety personnel helped Wilson from the car for medical evaluation.

When the race resumed, #89 Ray Bockstahler’s car was unable to move which left Crazy 8s at a 2-on-4 disadvantage. Bowley still managed to hold the lead for a few laps thanks to #82 Larry Younghusband’s stellar blocks against #22 Mike Newenhouse. Eventually the numbers game was too great and Bowley had to go on the attack. The fiery front-end shot on Newenhouse didn’t pack enough punch to stop him; a final block by Janjanin secured the win for Chicago Hitmen and sealed Crazy 8s’s Championship fate.

Round 5 on September 22 is their final opportunity at a trophy this season and perhaps they’ll still be a factor in the Championship outcome because they could match up with Full Throttle in the first race.

View the Round 4 photo gallery!