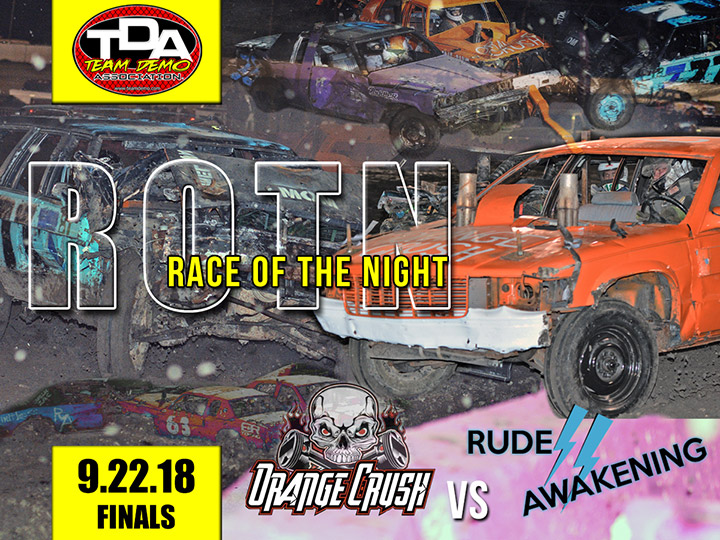 Orange Crush and Rude Awakening put an exclamation point on the 2018 season and closed Round 5 with a chaotic confrontation. Rude Awakening’s thin supply of cars, thanks to short notice and some brutal races, forced them to be economical and make some friends. #78 Steve Schaefer made an impactful guest appearance and was a big factor in the first and second round wins and used one car to do it. #777 Pete Ryan took #7 Zac Van Allen’s second round wagon, added a couple 7s, and reused it in the Finals. The lineup became even more colorful in the Finals when Schaefer borrowed a Full Throttle car and #70 Larry Younghusband was willing to wreck one more time in his Crazy 8s car.

Orange Crush’s victory lap also took a different lineup with #60 Dave Swan and #63 Levi Turnbaugh back in the seat, while Tom Lewis and Elmer Fandrey stood by waiting to celebrate a Championship. Rude Awakening would make them earn it one more time.

Turnbaugh slammed and spun out Schaefer down the front stretch as Van Allen and #61 John Clemmons went side-by-side into Turn 1. Van Allen drove upwards, pushing Clemmons towards the wall, smashing through the orange trunk. Pete Ryan screamed across the track towards second place #64 Ryan Riley and connected with a massive hit to the rear axle. Clemmons & Van Allen were wedged together and Turnbaugh took the opening to mash the front side of Van Allen into the concrete. All cars collided in some form with a total 12 impacts of in a matter of 20 seconds! Insanity had been unleashed.

Van Allen got the worst of it, mangled against the wall, desperately smoking the tires to get any traction. None would be found. He was forced to stew in frustration, no longer a factor in the race. Younghusband mounted Rude Awakening’s defense, forcing Clemmons to go high and carry too much speed into Turn 1, which sent the leader nose first into the wall and receiving a nasty rebound for added misery. Two turns later, Younghusband got him again, and this time was enough to end the threat of further laps from Clemmons.

Riley was speeding up and getting into a groove, out pacing the multi-colored defenders as he completed Lap 2. Suddenly, an errant friendly fire head-on between Turnbaugh and Riley gave Rude Awakening a momentary reprieve and probably a double dose of Deja Vu for Turnbaugh. Riley withstood the hit and rapidly flew around the track to take Lap 3. Turnbaugh missed a glancing blow on Pete Ryan and careened into and on top of the trashed trunk of Clemmons! The numbers advantage immediately swung to Rude Awakening with 3 of their 4 cars in hot pursuit of Riley.

Younghusband and Ryan both had targets set on Riley in Turn 4. Swan dashed into the scene and put a perfect block on Younghusband, but couldn’t get to Ryan as he drilled Riley in the front fender. Schaefer and Ryan hit again in rapid succession, sandwiching the #64 in front of the white flag. Younghusband darted towards Turn 1 realizing that Rude Awakening had zero laps to this point, but it was too late to gain enough ground. Swan pushed away the other road blocks and Riley was able to re-fire en route to a clean final lap, dodging two last ditch attempts around Turn 4, and collected the final win of the year.

A great battle to wrap up the year and leave everyone craving more in 2019!

#47 Steve Vollbrecht and #31 Steven Scarbro, Jr were key players and X-factors throughout the season for Full Throttle and Junkyard Dogs, respectively. For this final battle, they were staged side-by-side in row 1 and probably didn’t anticipate that they would have a reunion right back in that spot just a few minutes in the future.

Equally unforeseeable, Vollbrecht’s car backfired instantly at the green flag while Scarbro’s ride roared to life and set the chain of events in motion.

Scarbro, Jr cut a perfect corner around Turn 2 and dodged a hit from his cousin #49 Arthur Scarbro. #33 Dustin Wilson smelled the blood in the mud and blasted into Vollbrecht causing heavy damage to the purple wagon. Arthur connected with a wild, spinning shot into Steven on the front stretch which knocked Steven into Wilson and allowed #43 Shaun Elder to get across Lap 1 first.

Within seconds that lead evaporated around Turn 2 when Wilson nailed #4 Ron Johnston and wedged his car right in the path of Elder. Wilson took a direct hit to the driver’s door for the effort, but it proved to be extremely pivotal. Scarbro, Jr. continued to carve the corners and flew untouched around Lap 2.

Vollbrecht’s car finally reignited and he eyed Scarbro, Jr as he exited Turn 4. Scarbro, Jr stayed tight on the inside and Vollbrecht was only able to connect with a mild shove. Scarbro, Jr somehow escaped Full Throttle’s 3-car blockade between Turns 1 and 2 extended his lead with more big speed and wise maneuvers through Lap 4.

Two more block attempts by Full Throttle failed to connect. Scarbro, Jr had clear sight to the checkered as he barreled through the final turns, drifting the car at the perfect angle to maintain the blistering pace. On the opposite side, Vollbrecht pushed his car as hard as it’d go directly towards the on-coming blue missile. Even with only a couple seconds to spare, that was more than enough time for both drivers to realize what was going to happen. Neither let up.

The runaway trains ran out of track one car length before the finish line and collided with mammoth impact! Sparks and smoke shot out from everywhere as the twisted metal sliced through the front-end of both machines. Vollbrecht ricocheted backwards from the aftershock while Scarbro, Jr’s car was split open from bumper to post, looking more like it had been in a fight with an oversized rabid can opener. Ultimately, that speed and control supplied just enough offense and defense on the final hit that propelled him across the finish with only a half car length to spare.

A thunderous standing ovation from the capacity crowd honored the driver’s human sacrifice and fearless mindset. Undoubtedly, the whole scene is one of the year’s most dramatic, jaw-dropping moments and worthy of dual recognition for Hit of the Night to Vollbrecht and Scarbro, Jr.

Full Throttle were the odds-on favorite to win back-to-back Championships at the start of the season. Through Round 3, they had claimed 2 of the 3 event wins and just needed a little distance between themselves and second place over the next two events in order to secure the title. Instead, they fell to Orange Crush in a wild war at Round 4 and the gap narrowed heading into Round 5. A disastrous first lap with car problems and fluke damage allowed win-hungry Junkyard Dogs to pounce on the opportunity. JYD’s win eliminated the potential Orange Crush vs Full Throttle Semi-Finals showdown and ultimately book-ended the reigning Champ’s late season slump.

Full Throttle’s combined talent and tenacity were never questioned ever since the team’s debut in May 2011.  They competed in 40 Tournament of Destruction events; wrecked hundreds of cars; yet amassed only 6 event wins. For as much as the team was always in the mix and always a threat to win, that number seems low.  It is proof of how difficult it is to win the Tournament of Destruction and of the extremely high level of competition that spanned many of those 8 years. Ironically, the 6 wins rank Full Throttle #6 in Tournament victories since 1999, just 1 behind the 2011 & 2012 Champions Reckoning.

Uncertain futures for the team’s cornerstone members will have to be solidified in the off season and hopefully Full Throttle emerges for 2019 ready for another title run.