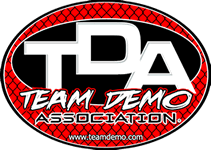 (JOLIET, ILLINOIS)  Team Demo Association – the World’s Only True Professional Team Demo Organization and established in the 1950s – is gearing up for what is sure to be another thrilling season of hardcore action in 2019!  To heighten the stakes of each TDA spectacular event, President Sherri Heckenast announced today a few changes for the 2019 season. While six highly competitive teams will be gunning for their share of the $44,000 nightly purse they will also be battling for an additional $20,000 end of year Championship Point Fund.

“We reached out to the fans in a survey last year and one of the biggest complaints from our shows was about increasing the competition,” stated Heckenast today.  “We wanted to be proactive, listen to the fans, and make Team Demos as competitive as possible.  We have created a new six team format while still using the same 57 cars, same number of races (7) and of course one nightly champion just like before. Finding cars, building them, and managing eight teams has proven to be extremely difficult the last few years.  I personally think the move to the new  format will make for a much better show with stronger competition and improved strength of our teams, which is what the fans ultimately want and deserve!”

At each of the five Team Demo Association shows this year, a seven-race format will thrill the huge throng of fans in attendance at the pristine Dirt Oval at Route 66 Raceway in Joliet, Illinois.  Under the old bracket format, four teams went home for the night right out of the gate following round one.  The new and improved format in 2019 will give all 3 round 1 losses the opportunity to redeem themselves in a 3 on 3 last chance bracket race thus giving them a final shot to be the champion. We’re confident this opportunity will give all teams more experience, opportunity and definitely add a unique twist to the program for the fans!

Round one of the Tournament of Destruction for the Team Demo Association is slated for Saturday, May 25 with a special Military Night program.  Other rounds of competition for the six teams will take place on June 22 (Super-Con Night), on July 20 (Five-0 at the Dirty O), on August 24 (Scout Night), and on September 21 (Racin’ for Boobs).  Season tickets and single show tickets are now currently available for purchase online at www.teamdemo.com.

Dirt Oval 66 is the home of the Team Demo Association, which has been featured on SPEED Channel, TLC, FOX, Discovery, and MAVTV!  Founded in the late 1950’s at Raceway Park known as “Team Races” and later at Santa Fe Speedway, the series moved to Joliet in 1999.  Team Demolition Association is Roller Derby with Automobiles.  Professional teams engage in a total war of carnage.  Huge crowds feel the passion and power of this event, as it grabs all emotions right from the drop of the green flag.  Bent Metal, Twisted Chrome, and a passion to WIN is what makes up this very dangerous game of heavy impact!