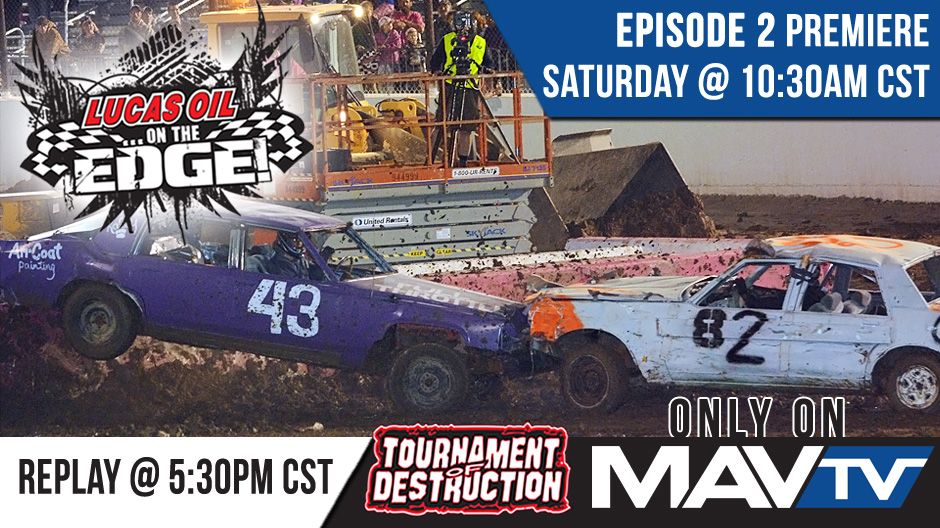 MAVTV presents coverage of the 2015 Tournament of Destruction Finale beginning Saturday, Dec. 19 at 11:30a.m. ET as part of the new season of “Lucas Oil…On The Edge!”

TWO 30-minute episodes will take viewers inside the chaotic, carnage-educing environment of Team Demolition Derby only found at The Dirt Oval @ Route 66 Raceway in Joliet, IL.

8 elite demolition derby teams must utilize speed, strategy, and brute crushing power against their opponents in a battle to collect 5 laps and advance through the elimination style bracket until only 1 team remains. The yearly Tournament is comprised of 5 monthly events, May thru September, which awards points towards the overall Championship and a share of over $150,000 in payouts.

All the twisted wreckage and dramatic moments from the first round races will comprise episode 1, while episode 2 will feature the second round and Finals.

Team Demolition Derby has been one of the most prominent fixtures in the history of “Lucas Oil… On The Edge” having been featured in nearly all of the show’s 11 seasons on a previous network. MAVTV resurrected the widely-popular motorsports program with plans for over 30 new episodes through 2016.

MAVTV is available nationwide on select cable and satellite television packages. Fans can use the MAVTV Channel Finder (http://ow.ly/VNpCR) for more information and demand MAVTV from their service provider if it’s not currently offered.

All original “Lucas Oil…On The Edge” episodes including the Tournament of Destruction will air on MAVTV and all archived shows will be available on the new LucasOilRacing.TV app being launched January 2016.